Skin cancer is the most common type of cancer in the United States. One out of every five Americans will get some form of skin cancer during their lifetime. With early detection and treatment, most of these cancers are completely curable. People at high risk for developing skin cancer are those who have had a lot of sunburns, numerous moles, naturally red or blond hair, light skin that can easily burn, and people who have a close relative who has had skin cancer.

Basal Cell Carcinomas (BCC) are the most common type of skin cancer. The basal cells are those in the deepest layer of the skin. It most often forms in skin that has sun exposure: the face, ears, scalp, etc. It rarely spreads to other parts of the body, and doesn’t grow very quickly. Early treatment is almost always a cure, but patients who have had one skin cancer are known to be at a higher risk of getting another. Left untreated, it can spread into surrounding tissue and cause extensive damage. According to medical literature, approximately 3 out of every 10,000 basal cell carcinomas reported metastasize and become quite dangerous.

Over the years at Basuk Dermatology, we have seen more than 10,000 basal cell carcinomas (we often see several in one day!), though none in our care has ever metastasized. For those that do metastasize, most go to regional lymph nodes. Others may metastasize to the lung or bone. No currently available treatment successfully treats BCC that is locally advanced (laBCC) or metastatic (mBCC). Since the median survival time of mBCC is only eight months, the need for a successful treatment is imperative. A medication approved in 2012, Erivedge [Vismodegib (GDC-0449)] has shown promising antitumor activity in patients with advanced metastatic BCC. More information is available at http://www.erivedge.com

Squamous Cell Carcinomas (SCC) are the second most common type of skin cancer. It is more common on skin that is exposed to the sun (see our page on actinic keratosis), but it can appear anywhere on the body, including hidden areas and in the mouth. SCC very rarely spreads to other parts of the body, though it does so more often than BCC, so early treatment of SCC is important.

Malignant Melanoma is by far the most serious form of skin cancer. Read more about melanoma by clicking here.

Curettage and electrodesiccation: small basal cell and squamous cell tumors can be removed by scraping the tumor with a curette (a surgical instrument shaped like a long spoon) and then using an electric needle to gently burn or “cauterize” the remaining cancer cells and a small surrounding area of normal-looking tissue to attempt complete destruction of the cancer. Follow up appointments are highly recommended to check for any regrowth.

Cryosurgery: small primary basal cell and squamous cell tumors may be destroyed by freezing the tumor with liquid nitrogen. The frozen cancer cells are destroyed by the freezing. They later slough off allowing the underlying normal skin to heal.

Excision: total removal of the cancerous skin is the safest method, but is more involved than the previously mentioned options. The tumor and a safe zone around it (margin) is removed. The size of the safe zone varies by type of skin cancer. This method is used for all types of skin cancer, and is the only method used for malignant melanoma removal. When a melanoma is removed, and found to have been especially deep, there is an increased chance that it has spread to other areas of the body. In cases where deep melanomas are found, further surgical procedures are recommended to try to prevent further spread.

Mohs Micrographic Surgery is preferable in areas where a minimum amount of margin is desirable. For example, if a skin cancer is found on a face, most patients prefer a minimum sized excision. Mohs surgery involves removing the entire visible tumor, and then, in the same visit, microscopically checking the edges of the removed tissues and continually removing more until no more tumor is seen under the microscope. A Mohs surgeon uses this technique to remove the entire tumor, including cells that can’t be seen without a microscope. We have a complete Mohs laboratory in our office and have had many successful outcomes.

While Mohs surgery gives us minimal margins around a cancer site, some margins are necessary. The larger the diameter of the cancer, the more healthy surrounding tissue that has to be removed for safety. So it’s important to have cancers removed as early as possible to minimize risks to other tissues and to minimize the size of your resulting scar. Dermatologists are expert at finding skin cancers even when they’re small – often so small that patients are not yet bothered by them: have your dermatologist look at those strange things on your skin!

It can be hard to tell benign skin lesions from cancers, and hard to diagnose particular skin cancers, as can be seen from just a few samples shown here: 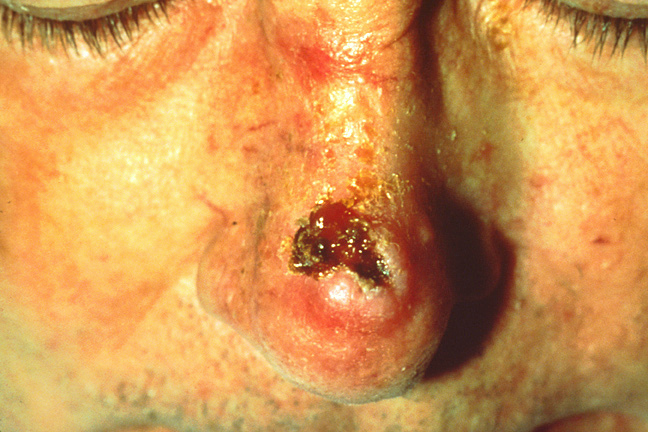